This Amethyst crystal has smokey quartz inclusions and internal fractures that gives it unique character. This crystal has an additonal "bonus" of a small penetrator crystal that has formed from the side of the crystal. The termination is in great shape and the crystal has nice luster overall. It appears to have small inclusions of hematite as well. 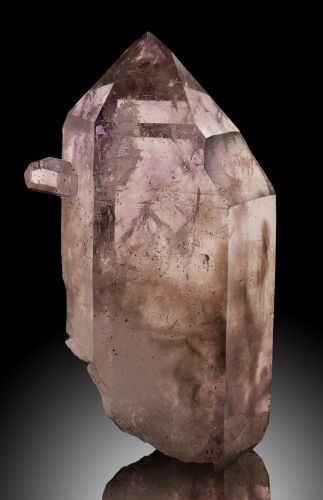 Brandberg Quartz are found only in the Goboboseb Mountains (more often known as Brandberg locality) in Namibia, Africa. These crystals have a combination of Amethyst, Clear Quartz and Smokey Quartz. This location is known for exceptional quality crystals with great clarity, and rare and interesting inclusions. Some inclusions that can be found in Brandberg Quartz can be; enhydros, phantoms, scepter formations, Lepidocrosite, and Hematite.

Penetrator quartz has one or more crystals partially lodged into the primary crystal from within.

Amethyst is a variety of quartz which owes its coloration to the presence of iron in the area of its formation.

The word Amethyst is derived from ancient Greek meaning "intoxication". It was believed by both ancient Romans and Greeks, if they wore Amethyst or made their goblets of the material, it would help prevent them from becoming intoxicated.

Amethyst has been used in jewelry making for centuries. Spectacular, priceless carvings dating to the ancient Egyptians are displayed in museums. Amethyst is found in many places around the world. However, the most beautiful Amethyst, displaying deep rich purple coloration, is normally found in the countries of Brazil and Uruguay.

Amethyst is the birthstone for February.