Each Pyrite Sun specimen varies slightly in size and its degree of brillance. But you can be assured, we will always choose the highest quality specimen we have available for you. 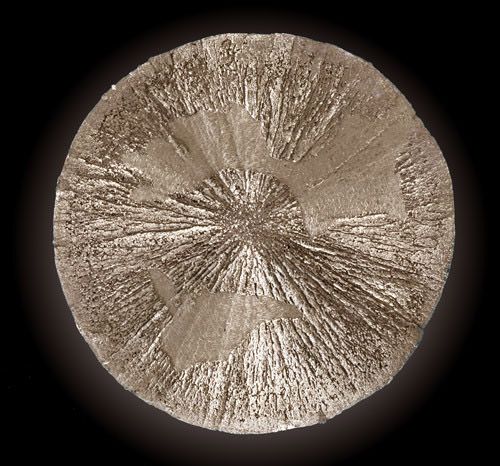 Skip to the beginning of the images gallery
More Information
A golden yellow to brown, widely occurring mineral sulfide, FeS2, Pyrite is used as an iron ore and to produce sulfur dioxide for sulfuric acid. It is also known as Fool's Gold because it resembles gold, even though it is harder (H. 5-6) and a paler yellow. Pyrite is often found in quartz veins, sometimes even with gold. Pyrite crystals are common; it may also occur as grains or in masses. It streaks a greenish black and when tarnished, may resemble chalcopyrite. If struck sharply against steel, pyrite gives off sparks. It is thought that early man carried pyrite to start fires that contributed to his survival. The name itself is derived from the Greek πυρίτης (puritēs), "of fire" or "in fire," from πύρ (pur), "fire.” Although Pyrite is fairly common, specimens such as this are highly collectable. Found only in the underground coal mines of Sparta, Illinois, are unique mineral specimens known as Pyrite Suns. These unusual Pyrite specimens are found imbedded in compacted slate, amongst coal deposits which formed some 300 million years ago. It is theorized that the development of these striated Pyrite specimens is due to the great amount of pressure exerted upon them, forcing them to spread out laterally, rather than developing in a more common cubic form.