$18.50
In stock
SKU
i-min-297
Add to Wish List Add to Compare
Quick Overview
These pieces of Lake Superior Agate are fresh from the shores of the Keweenaw Peninsula, the northern tip of Michigan's UP. Only glaciers and waves have tumbled them, so they're a rough, rounded shape. The Lake Superior Agate is hand selected and include a full variety of colors and patterns. The price listed is per pound. Measurements: ~ 3/4" - 1-1/2" Location: Keweenaw Peninsula, Upper Peninsula, Michigan
Skip to the end of the images gallery
CLICK TO ENLARGE 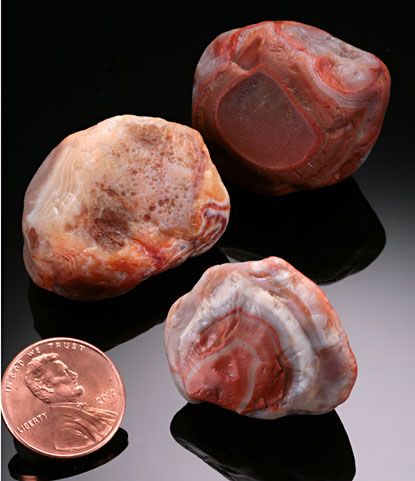 Skip to the beginning of the images gallery
More Information
Lake Superior Agates are unique from other agates due to their strong red color. This comes from the oxidized iron introduced to them during their formation. Beginning as small bubbles of volcanic gasses in lava that hardened, ground water circulated silica along with the iron, which over time crystallized to form agate. A massive glacier that moved across what is now Minnesota some 10-15,000 years ago, uprooting much of the agate formations and depositing them along the shores of Lake Superior. Between the smashing force of the glacier that dragged them and the gentile waves of the lake, Lake Superior Agates tend to be found in roughly polished rounded masses. Lake Superior Agates are the state mineral of Minnesota, and are also found in the areas of Wisconsin, Michigan's Upper Peninsula, and Ontario that boarder the lake.