$12.50
In stock
SKU
i-fsl-186
Add to Wish List Add to Compare
Quick Overview
Large pair of Ammonites in a bamboo box. Since every pair is unique, size and color will vary slightly from image provided. We will always pick the best quality available at time of purchase. Each specimen box measures: ~ 3" across Each Ammonite specimen measures: ~ 1-1/2" across
Skip to the end of the images gallery
CLICK TO ENLARGE 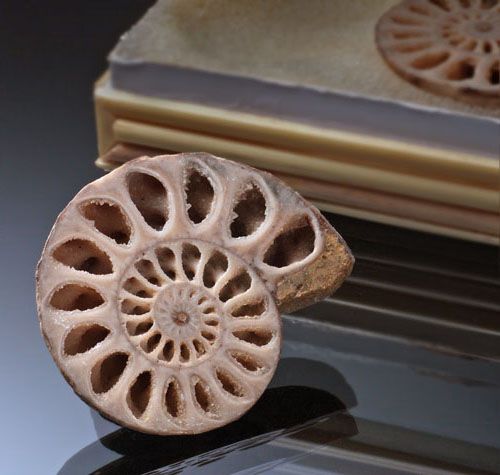 Skip to the beginning of the images gallery
More Information
This is a Cleoniceras cleon species of Ammonite. Ammonites are an extinct group of marine animals in the Cephalopoda class. They are invertebrates and are more closely related to coleoids (squids, octopus, and cuttlefish) than they were to the chambered nautilus, even though they looked much more similar to the nautilus. The name Ammonite was derived from "ammonis cornua," translated to mean Horns of Ammon. Ammon was an Egyptian god that was typically depicted wearing ram horns, whose spiraled shape is similar to that of an Ammonite. Ammonites first appeared in the oceans during the Devonian Period, some 400 million years ago. Between 145 and 65 million years ago these extinct marine creatures, flourished in a warm, shallow sea which covered much of the earth. As the shells of the creatures accumulated on the sea floor, they were buried by sediment and over the ages, transformed into stone by physical and chemical processes. The chambers of the Ammonite acted as tiny geodes, allowing calcite to form crystals throughout. Ammonites died out around 65.5 million years ago along with the dinosaurs.