$18.50
In stock
SKU
i-fsl-620
Add to Wish List Add to Compare
Quick Overview
These smaller sized Iridescent Cleoniceras Ammonites have been hand selected by us. So, you can be certain we'll choose a fine specimen for your collection. As we're sure you already know, no two specimens are identical. The photo is a good representation of the specimen we hope you'll intrust for us to choose for you. Measures: ~ 1-1/4+" across Location: Madagascar, Africa Age: Cretaceous ~ 100 m.y.a.
Skip to the end of the images gallery
CLICK TO ENLARGE 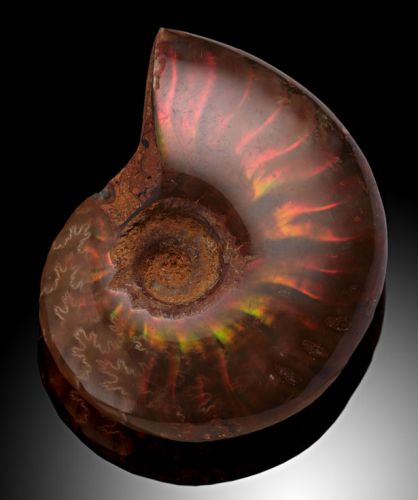 Skip to the beginning of the images gallery
More Information
Ammonites are an extinct group of marine animals in the Cephalopoda class. They are invertebrates and are more closely related to coleoids (squids, octopus, and cuttlefish) than they were to the chambered nautilus, even though they looked much more similar to the later. The name Ammonite was derived from "ammonis cornua," translated to mean Horns of Ammon. Ammon was an Egyptian god that was typically depicted wearing ram horns, whose spiraled shape is similar to that of an Ammonite.

Ammonites which have an iridescent glow or "color flash" obtained this look by the absorption of many fine layers of aragonite to their shells during their permineralization / fossilization process. As light strikes the specimen it is broken up by these layers and scattered by defraction. The light then interferes with itself to produce a "play of light" called iridescence. Iridescent colors change depending upon what angle the eye views the specimen. The word iridescence is derived from Iris, the Greek goddess of rainbows. Some Ammonites have been discovered with such magnificent coloration to their shells they are referred to as "Ammolite". Ammolite is considered a gem and is quite valuable to both collectors and in the jewelry industry