$24.50
Out of stock
SKU
i-fsl-651
Add to Wish List Add to Compare
Quick Overview
These Cave Bear molars are hand selected to insure high quality. Each tooth will of course vary a bit in size and shape. We hope you'll entrust us to select a fine specimen for you. Measurements: ~ 1-1/2+" long Location: Romania Time Period: Pleistocene / Ice Age
Skip to the end of the images gallery
CLICK TO ENLARGE 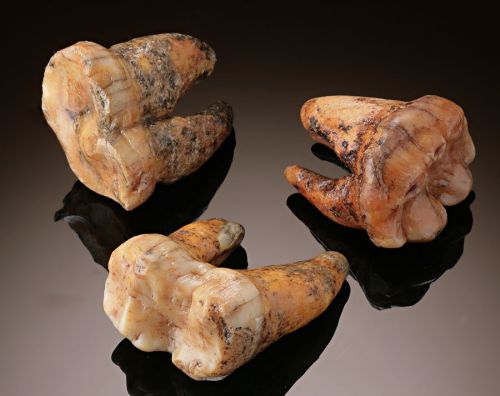 Skip to the beginning of the images gallery
More Information
The Cave Bear, or "Ursus spelaeus," was a massive omnivore that lived in Europe during the Pleistocene period and became extinct around 28,000 years ago. This enormous animal is thought to be a relative to today’s brown bear but it was significantly larger. Adult males averaged half a ton in weight, and when standing on their hind legs they were up to 10 feet tall! That would put them comparable in size to the largest of modern-day Kodiak and Polar bears.

Unlike other bears, which used their caves mainly for hibernation, Cave Bears spent much more time in their caves. It's not uncommon to find the fossilized skeletal remains of several cave bear families from different time periods in the same cave.