$435.00
In stock
SKU
i-fsl-656-DS
Add to Wish List Add to Compare
Quick Overview
The distinct bite mark on this Carcharocles Chubutensis tooth clearly indicates this shark was locked in battle with an equally formidable adversary. Whether is was for territorial reasons or a possibly a dispute occurred while feeding upon a whale, we will never know. The tooth by itself is quite impressive, displaying nice enamel retention with nominal hydration lines in both its root and enamel. The serrations are excellent, as is the tooth's tip. The rear (display) side of the tooth displays a nice full bourlette, interrupted only by the scrap and puncture mark caused by whatever adversary it was battling against. A rare and unusual fossil specimen. Measures: ~3-7/8" (root to tip) x 2-1/2" across Location: South Carolina Sate, USA Age: ~25 million years old
Skip to the end of the images gallery
CLICK TO ENLARGE 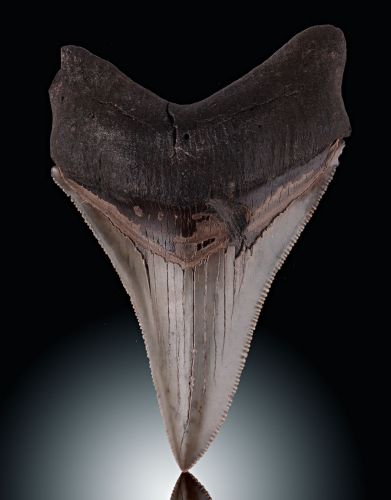 Skip to the beginning of the images gallery
More Information
Carcharocles Chubutensis was a gigantic prehistoric "megatoothed" shark which thrived within earth's oceans during the Oligocene - Miocene time period, approximately 28 - 5 million years ago. Research has concluded Carcharocles Chubutensis was very closely related to an even larger predator, Carcharadon Megalodon, which also swam the oceans during the same approximate time period. However, since a shark's skeletal system is composed not of bone but cartilage, skeletal fossils are extremely rare as cartilage rarely fossilizes, so making ancestral comparisons between sharks is very difficult. This is the reason why shark teeth are so important to the fossil record.