$495.00
Out of stock
SKU
i-fsl-777-DS
Add to Wish List Add to Compare
Quick Overview
Dorsal vertebrates are the "backbones" of an animal. In dinosaurs, they were located between its tail and before their necks began. Vertebrates are one of the main bones in dinosaurs that paleontologists study. This particular specimen is quite nice, being as complete as it is and in excellent condition. Measures: 2" Long x 1-1/2" Wide x 1-1/2" High Location: Bone Cabin Quarry, Morrison Formation, Wyoming State, U.S.A. Time Period: Jurassic / ~150 MYO
Skip to the end of the images gallery
CLICK TO ENLARGE 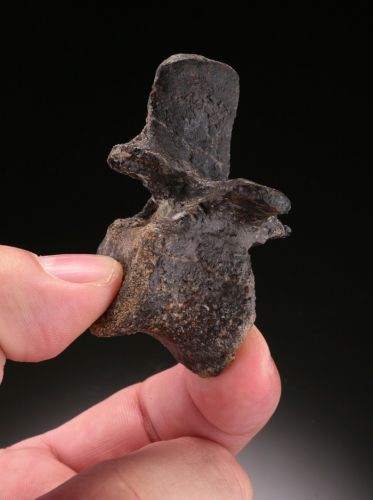 "Dryosaurus" meaning "Oak Tree Lizard" was a genus of ornithopod dinosaur that lived inside the forests of North America during the late Jurassic period, around 150 million years ago. Dryosaurus was an "iguanodontid" which had a long thin neck, tail and legs. Although its legs were slender they were exceptionally strong, giving the animal great speed and agility. Its tail was also very strong. This helped greatly in the animals balance and maneuverability.  Due to these features and no other distinguishable defensive features, it's believed Dryosaurus relied on its speed and agility to escape predators as its mode of self defense.

Dryosaurus had a sharp toothless upper beak and "cheek teeth". It's hypothesized that the animal also had cheek pouches to store its food. The creature also had two very short arms with five fingers on each. Its eyes and beak were exceptionally large in its infancy but as the animal grew older, the eyes became smaller and its beak became more slender.

Fossils of this particular dinosaur are generally found in the western United States. All known discovered fossils of Dryosaurus are before the animal was fully grown, so as of this point, it is unknown what its exact size would have been, once fully grown .