$595.00
In stock
SKU
i-fsl-778-DS
Add to Wish List Add to Compare
Quick Overview
Caudal vertebrates comprise the majority of the skeleton of an animal's tail and are one of the most studied bones in dinosaurs. This particular specimen is a prime example and in excellent condition. It has been left embedded in its original matrix which is aesthetically pleasing and the specimen has only been lightly stabilized in order to prevent deterioration.
Skip to the end of the images gallery
CLICK TO ENLARGE 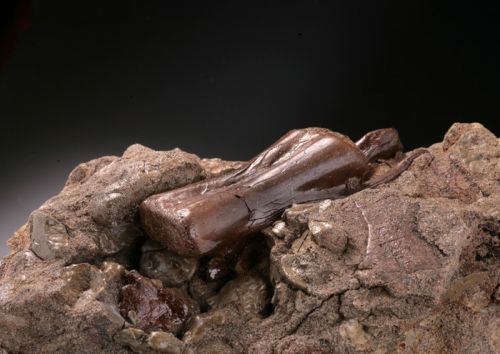 Ornithomimus or "Bird Mimic" is a genus of ornithomimid dinosaurs that roamed the earth in the late cretaceous period around 70 million years ago. With its hollow bones, this creature was exceptionally fast. Aiding in its speed were very slender foot and leg claws, which along with its strong tail, made Ornithomimus very agile. When it ran it would level it's back to be parallel with the ground, and it's tail would stiffen, thereby aiding in its swiftness. Aside from its two arms, the creature had a similar body structure of today's modern Ostrich and it had the speed to match. There is even fossil record indication that Ornithomimus was covered with feathers.

Ornithomimus was an omnivore that would eat a little bit of everything in order to survive. However, its toothless beak was too small to dine on larger prey. So, along with smaller creatures, it ate plants, nuts and berries.

Even though Ornithomimus had a small head, its brain cavity was large. Therefore, it's hypothesized that the animal was one of the smartest non-avian dinosaurs.