$495.00
Out of stock
SKU
i-fsl-847
Add to Wish List Add to Compare
Quick Overview
This aesthetically pleasing mortality plate is comprised of both a Brittle Starfish specimen, and a nicely detailed Cambropalla Trilobite. 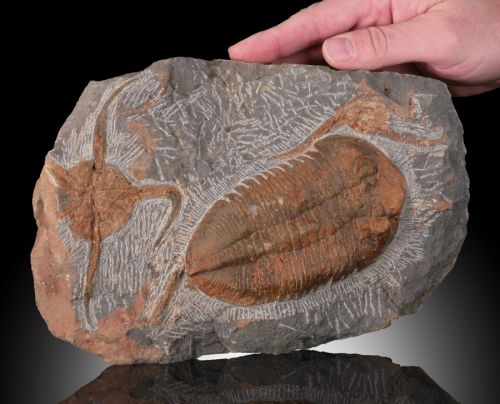 Sea levels were at their highest levels of the Paleozoic Era during the Ordovician Period and saw water temperatures of more than 110° F. These conditions allowed marine life to flourish and led to wide diversification. It is during this time that sea stars (from the class Asteroidea) and brittle stars (from the class Ophiuroidea) diverged.

Sea stars, or starfish, tend to have legs that are wider and more connected to one another. They had tubular feet enabling them to move. Brittle stars on the other hand had narrower, more flexible arms that they wiggled in order to move around the sea floor. The type of brittle star fossils found in Morocco are of the genus Ophiura and are characterized by a disc-like body with long, thin legs radially arranged around it. In fossil plates their wavy arms give the appearance of dancing.

Although many Starfish are carnivores, feeding upon small fish, oysters and mollusks, some Starfish are omnivorous, supplementing their diets with organic particles such as algae.

As Starfish have been living in our seas and oceans for close to 1/2 billion years with very little change in their anatomy they are a classic example of what is referred to as a "living fossil".

Trilobites are extinct hard shelled marine arthropods with amazingly great diversity. It is estimated there were over 15,000 known species of Trilobita, making them the most diverse animal life form that ever existed on earth. In Morocco, new Trilobite specimens are being discovered every year. Trilobites are are important as paleo-zoic guide fossils, having existed for over 270 million years. They began their existence during the early Cambrian time period (520 mya), long before dinosaurs existed but went extinct around 250 mya, before dinosaurs died out.

Trilobites keen eye structures were highly adaptable to their environment. Some had lenses extending off of antenna like protrusions, while others had large eyes with thousands of lenses which enabled the creature to see 360 degrees. The name Trilobite means "three lobes", and is so named due to the long sections of the animals body, the Left & Right Pleural Lobes and the middle Axial Lobe.

With their graceful body lines one can understand why these interesting yet bizarre creatures have been nicknamed "The Butterflies of the Sea".