This simple yet elegant Zuni wedding vase is the perfect little gift. The colors are warm. And although the butterfly patterns blend into the vase they still pop out nicely. 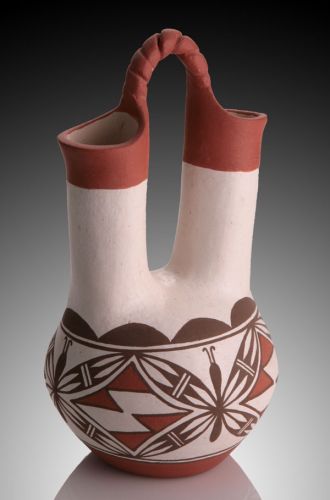 Acoma means "People of the White Rock". Their location is in Sky City, one of the longest inhabited places in North America, dating back over 1200 years. It is located on top of a mesa, some 400 feet high, and is located in New Mexico, about 50 miles west of Albuquerque.

The Pueblo of Zuni (She-wa-na, meaning tThe Middle Place) is located approximately 40 miles south of Gallup, New Mexico. They were farmers whose culture in there present location has been dated back from between 3000 - 4000 years. At one time the Zuni lived in six separate villages, spread out in the desert of southwester New Mexico. After their revolt against the Spanish, the Zuni took refuge on top of a steep defendable mesa called Dowa Yalanne. The Zuni speak a language that is unrelated to any other Native American nation, dating back over 7000 years.