$360.00
Out of stock
SKU
i-tw-14
Add to Wish List Add to Compare
Quick Overview
This is an excellent example of pottery created by Travis and Rosemary Lewis. The piece is of course hand turned, nicely polished and carved all the way around. It is signed on the bottom and would make not only a nice addition to someone's collection, but a perfect wedding gift as well. 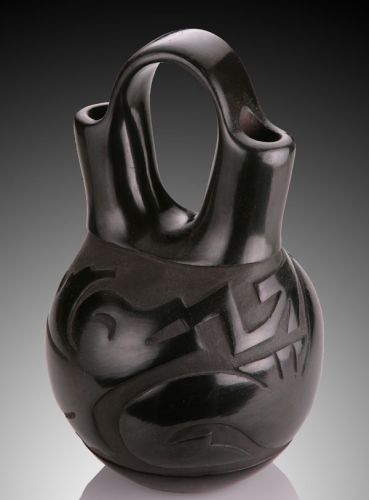 The pueblo is a member of the Eight Northern Pueblos, and the people are from the Tewa ethnic group of Native Americans who speak the Tewa language. The pueblo is on the Rio Grande, between Ohkay Owingeh (formerly San Juan Pueblo) to the north and San Ildefonso Pueblo to the south. Santa Clara Pueblo is famous for producing hand-crafted pottery, specifically blackware and redware with deep engravings. The pueblo is listed on the National Register of Historic Places."

"Travis and Rosemary Lewis are full blooded Native Americans born into the Santa Clara-Tewa/Pima Pueblo. Travis was born in 1951 and Rosemary was born in 1952. Rosemary began experimenting with pottery at the age of 9. She was inspired to learn the pottery making process from her Mother, Olaria Sisneros. Travis was inspired by Mary Cain, who is also is a famous potter from the Santa Clara Pueblo. They also were economically motivated to continue the family tradition of pottery making. Travis and Rosemary specialize in the traditional black Santa Clara hand coiled and etched pottery, featuring kokopelli. They both participate in all procedures of the pottery making process. They dig up the clay from a sacred ground within the Santa Clara Pueblo. There is several different stages involved in order to prepare the clay to begin shaping into pottery. They mix, hand coil, shape, etch, and fire the pottery the traditional way, outdoors. They enjoy etching kokopelli (the flute player) on their pottery. They sign their pottery as Rose M. Lewis, Santa Clara Pueblo, followed by the letter T incorporated into a letter L. Travis and Rosemary are related to many other famous potters, among them are Geraldine Naranjo and Kevin Naranjo (cousins)."