$450.00
Out of stock
SKU
i-fsl-1035
Add to Wish List Add to Compare
Quick Overview
This smaller sized Heteromorph Ammonite, is in very nice condition. There has been no restoration on the specimen that we can observe. It has been beautifully detail, with excellent shell retention. A great piece for anyone's collection. 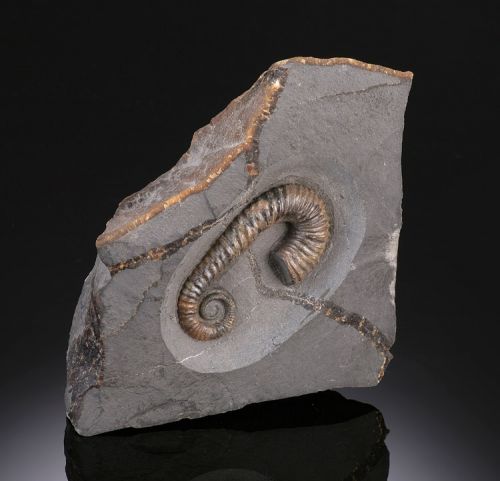 Skip to the beginning of the images gallery
More Information
Ammonites are an extinct group of marine animals in the Cephalopoda class. They are invertebrates and are more closely related to coleoids (squids, octopus, and cuttlefish) than they were to the chambered nautilus, even though they looked much more similar to the later.

The name Ammonite was derived from "ammonis cornua," translated to mean Horns of Ammon. Ammon was an Egyptian god that was typically depicted wearing ram horns, whose spiraled shape is similar to that of an Ammonite.

Unlike more commonly structured (homomorphs) Ammonites, Heteromorph Ammonites had uncoiled shells. This body shape made them very poor swimmers. They most likely drifted along in the seas, feeding on plankton, or crawled along the seabed, feeding on slower prey.

Heteromorph Ammonites have been found worldwide.