As with all of our material, these specimens are completely natural. Therefore each will vary somewhat in size and shape. The images are a very good representation of what we will choose for you. You can count on us to choose an excellent specimen on your behalf. 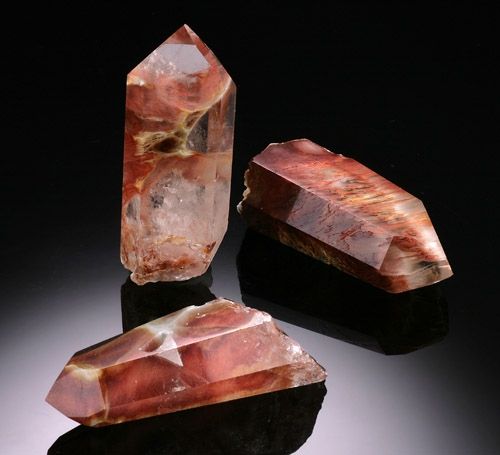 Skip to the beginning of the images gallery
More Information
Clear Quartz is one of the most admired minerals by both geology enthusiasts and those practicing the Metaphysical properties of minerals. Quartz is composed of silica (SiO2), and forms an important part of most igneous rocks. Quartz occurs in crystalline masses, and when conditions permit, it forms hexagonal crystals. Perfect crystals are rare. Industrially, crystal Quartz can be cut in a certain way in order for it to produce an electrical charge. This effect makes Quartz very useful for radio, television, and radar. Colors or inclusions in Quartz are due to the presence of other minerals (particularly iron), combining with Quartz during its formation. Common varieties are rose quartz, amethyst, citrine, rutilated, and tourmalinated quartz. Amphibole Quartz (or Angel Phantom Quartz) has inclusions of several different minerals, including Asbestos, Limonite, Kaolinite, Hematite, and Lithium. The name Angel Phantom Quartz comes from the appearance of the inclusions that have been likened to the wispy wings of angels. Metaphysically, Amphibole Quartz is said to let the holder communicate with their Guardian angel and indicates when angels are nearby.