We are proud to be able to offer this museum grade Triceratops jaw section. There has been no restoration. And, the teeth were found right along side the bone. They have been affixed to the jaw, at the top of where the inside channels guiding the teeth into the animals mouth would have been. This gem of a specimen would be an absolutely awesome addition to anyone's collection. A showpiece. 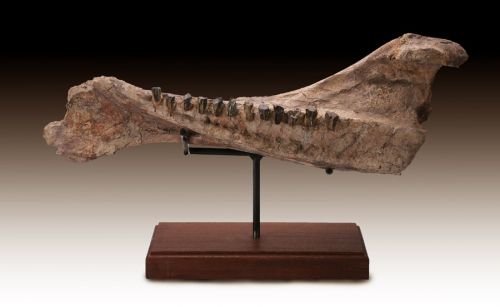 Outside Tyrannosaurus rex, Triceratops may arguably be the most popular & recognizable dinosaur that ever lived.

Triceratops was a large plant-eating ceratopsian, quadrupedal dinosaur. It had a large frill of bone at the back of its skull and three large, forward pointing horns, that the "normally gentle" beast could use, when it needed to either defend itself from large carnivorous predators, or when asserting itself, within its own pack. Triceratops is translated from Latin, meaning " Three horned face."

As Triceratops lived during the last 3 million years of the Cretaceous Period (145.5 million to 65.5 myo), it was one of the last non-avian dinosaurs that evolved.

Depending on gender, an average adult Triceratops was estimated to have grown approximately 25 - 30 feet in length, 9 - 10 feet in height, and weighed 13,000–26,000 lb. A Triceratops skull was huge, (more than 8 feet long) putting it among the largest of any land animal that has ever lived.

Because of their large, low and heavy heads, Triceratops normally fed on low grasses and plants. However, it's thought they may also have knocked down small trees with their plated heads and horns, for other sources of fibrous vegetation. Their teeth were numerous, (up to 800 teeth, that were constantly replacing) arranged in groups called batteries. They were so numerous that Triceratops teeth are the most commonly fossil found, from that particular dinosaur.