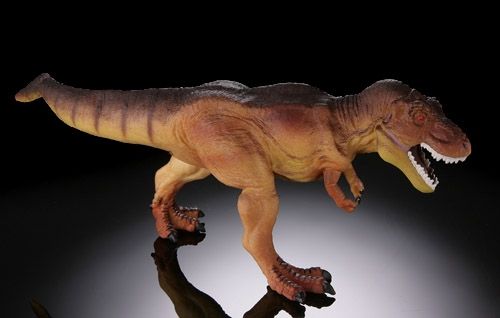 Skip to the beginning of the images gallery
More Information
Of all Dinosaurs, Tyrannosaurus-rex, meaning "Tyrant Lizard King", has unquestionably captured modern culture's title as being the most popular carnivorous theropod dinosaur that ever existed. Nicknamed "T-rex", Tyrannosaurus-rex, although not the largest carnivore ever, was the largest "tyrannosaurid" that existed by far, measuring up to 40 feet (~12 meters) long, 20 feet (~6 meters tall) and weighing up to 6.8 metric tons.

Tyrannosaurus' skull had pneumatized (honeycombs with tiny air pockets) bones in its 5' long skull, thereby making it lighter in weight. That unique structure allowed the creature to wield its massive jaws down like an ax, breaking bones and sinking its long cone shaped teeth into its victims. At 10x the force of an alligator, Tyrannosaurus-rex had the strongest bite force of any land animal that has ever lived and it's estimated to have been able to grab up to 500 lb. of flesh in one single bite from its prey.

This hunter / scavenger was literally a walking tripod, using its powerful tail to counter balance its enormous body, which tilted forward on an approximate 45 degree angle. A debate continues as to what Tyrannosaurus’ maximum speed was, as some paleontologists feel the animal didn't run, but walked fast enough to catch its prey. However, most suggest it could move up to 25 mph. Others suggest the beast sometimes caused itself severe injury or even death if it fell in full stride due do its massive size.