Calcite Crystal on Apophyllite and Quartz

This Calcite crystal development, nestled in a flowing bed of Apophyllite and Quartz, is nothing short of phenomenal. You could easily find a specimen like this from others with a price double what we're offering it for. The Calcite structure is undamaged, clean and clear. This would be an awesome addition to anyones mineral collection. 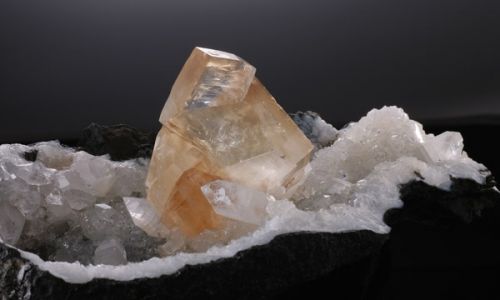 Apophyllite frequently occurs in zeolite minerals in basalt, and is less commonly found in pockets of granite. Green Apophyllite occurs most frequently in India where it is found nestled in Stilbite crystals. Colorless and green material from India is sometimes faceted as a collector's gem.