$60.00
Out of stock
SKU
i-fsl-1326
Add to Wish List Add to Compare
Quick Overview
From Germany is this interesting pyritized mortality plate, displaying several ammonites captured in time. The specimen comes with a display stand. There is very nice detail in the ammonites, which have excellent contrast with their slate matrix bedding. Measurements: ~ 5" x 5-3/4" Location: Holzmaden, Germany Time Period: Jurassic Period ~160 M.Y.O.
Skip to the end of the images gallery
CLICK TO ENLARGE 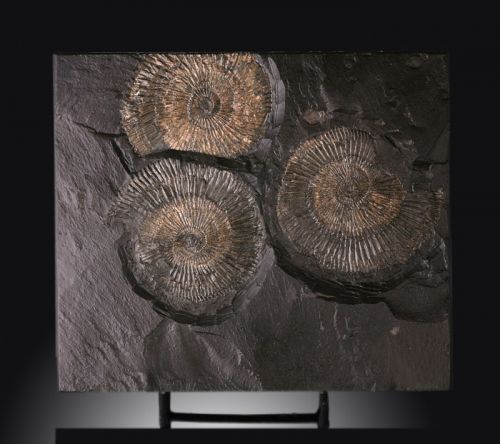 Pyritized Ammonites are considered some of the most collectable type of Ammonite fossil specimens. Iron Pyrite, also known as "Fool's Gold" enters the Ammonites chambers, replacing the animal's structure cell by cell. When the cellular replacement process goes just right, a magnificent fossil specimen such as the one pictured is created. The name Pyrite is derived from the Greek πυρίτης (puritēs), "of fire" or "in fire," from πύρ (pur), "fire.”