This fossilized Dragonfly is an excellent example of the fine preservation that can be found in the Solnhofen Limestone. There is a common presser line that actually gives the specimen a more three dimensional quality. The fossil itself has been protected with a light protective coating, which one could remove if desired. An excellent addition to anyone's collection. 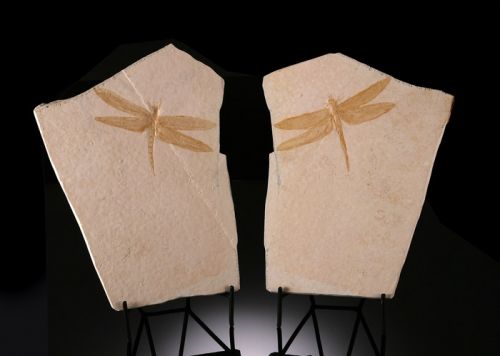 Skip to the beginning of the images gallery
More Information
Laying in the Bavarian province of Germany, are the Solnhofen Limestone pits, also known as Solnhofen Plattenkalk, an area that contains some of the most exquisitely well preserved fossilized life forms on Earth. From marine life to terrestrial plant and animal life forms, the Solnhofen Limestone beds contain a rare assemblage of fossilized organisms, including highly detailed imprints of soft bodied organisms such as sea jellies. During the Jurassic time period, some 150 million years ago, Solnhofen Plattenkalk were lagoonal, muddy waters, located at the edge of a sea, protected from high currents by an island group. These calm waters also had an extremely high saline content and were so low in oxygen that they could not support life. Therefore, there wasn't any reason for most other creatures to venture into the area. Any flora or fauna that died in nearby, outside waters could then gently float into the Solnhofen, mud beds without being torn apart by currents, or eaten by scavengers. Although there isn't a plethora of fossils in the now hardened beds, the diversity of meticulously well preserved organisms is incredible, giving us a keen look into life on our planet, some 150 million years ago. From dragonflies, with their wings intact, to flying dinosaurs (pterosaurs) with their primitive wing feathers perfectly preserved, very few place on Earth match the quality of fossilized specimens that can be found in the Solnhofen Plattenkalk.
Related Products
Check items to add to the cart or