$1,650.00
Out of stock
SKU
i-fsl-1364
Add to Wish List Add to Compare
Quick Overview
One of favorite's. We've never offered a Placodermi / Armored fish, until now. The preparation is exquisite, with every bit of matrix meticulously removed, even from the specimen's eye bones. Quality specimens like this are rare.
Skip to the end of the images gallery
CLICK TO ENLARGE 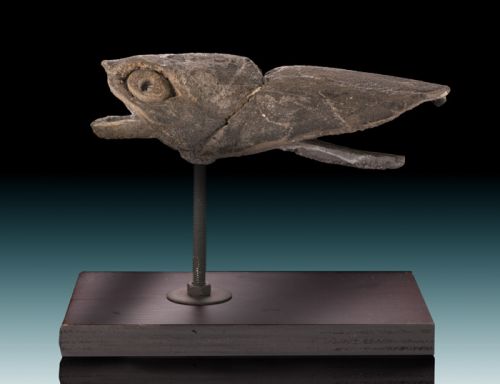 This specimen looks awesome on its display stand. A superb specimen, for anyone!

Placoderm, were a group of primitive jawed fishes known only from fossil remains. They existed throughout the Devonian Period (about 416 million to 359 million years ago), with two species continuing their existence into the later Carboniferous Period. During the Devonian Placoderms they were a dominant group, living in freshwater sediments of every continent except South America.

Although most placoderms were small in size, some actually grew over 13 feet (4 metres) long, with some placoderms, such as members of the genus Dunkleosteus, reaching sizes of 10 metres (30 feet) or more and were the dominant predators of the Devonian seas.

The name Placoderm, derives from characteristic armour of its dermal, or skin, bones. The creatures' armour formed a head & trunk shield, and was commonly connected by a paired joint in its neck area. The skeletal arrangement is so different from modern fishes that also have bony skeletons that it is highly unlikely the two groups are homologous. Early placoderms were the most heavily armoured and were bottom-dwellers.

Over time however, as the species developed, they adapted to become fast swimmers, between the surface and the bottom. From fossil remains it appears that some species had heavy, blunt jaw plates, for crushing hard-shelled invertebrates,. Others Placoderm were able to open their jaws wide enough to swallow smaller fish whole.

Placoderms origin is unknown, but it is theorized they might have shared ancestry with sharks, skates, and stingrays, and true “bony” fishe.