This Basilosaurus specimen from Morocco is a fine example of the formidable dentle structure this beast had as an apex hunter. Matrix has been left in areas in order to make certain the teeth remain stable. The enamel is excellent. The mandible itself is nicely prepped on its front side with it's reverse side left a bit more rough. 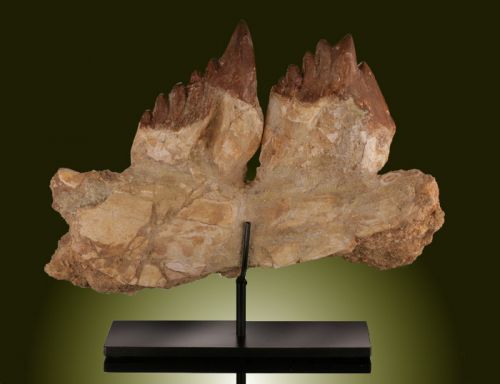 Before Megalodon, a whale was the apex hunter of the seas. It's name was Basilosaurus. (King Lizard)

When first discovered in 1834, it was thought Basilosaurus was a lizard. It wasn't until years later that it was found to actually be a killer whale.

With an average size of 55 feet in length, and a bite force of over 3,500 pounds, per square inch, Basilosaurus was the largest and most formidable creature that swam the seas during the Eocene period, between 65 million up until 35 million years ago.

Basilosaurus is considered to be the largest of archaeocete whales with a diet predominantly consisting of fish and large sharks. Its mouth was filled with an unusual variety of teeth consisting of spiked incisors and flesh shearing serrated molars which use for chewing its prey, rather than swallowing whole. From fossilized stomach contents, it's believed Basilosaurus would first attack its prey by crushing its skull, then tear its meal apart, before chewing it for digestion. It is theorized that they sometimes fed on the young of other Basilosaurus.

Basilosaurus did not have the same social skills as modern whales. Nor did they have a 'melon' which modern toothed whales have for sound communication.  This gigantic killer whale had two unusual smallish hind limbs, with fused tarsals, for use in mating.

Basilosaurus extinction seems to coincide with the extinction of the Eocene–Oligocene time period, as volcanic activity, meteor impacts and a cooling environment created a sudden change in the oceans and seas.