Pyrite with Quartz from Peru

$585.00
In stock
SKU
i-min-1275
Add to Wish List Add to Compare
Quick Overview
Intriguing Pyrite specimen with tiny Quartz clusters strewn between the Pyrite terminations. This piece sits on its own without a stand and can be viewed from all sides, and you will still think you are looking at the "front" of the specimen. 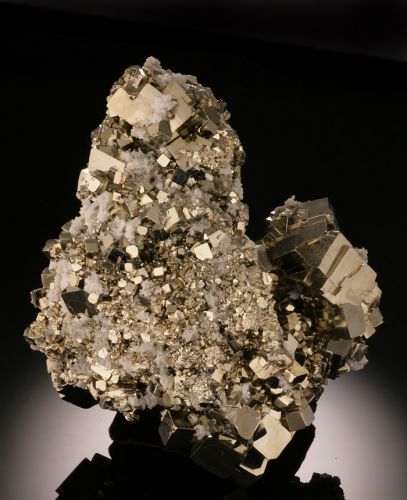 Clear Quartz is one of the most admired minerals by both geology enthusiasts and those practicing the Metaphysical properties of minerals. Quartz is composed of silica (SiO2), and forms an important part of most igneous rocks. Quartz occurs in crystalline masses, and when conditions permit, it forms hexagonal crystals. Perfect crystals are rare. Industrially, crystal Quartz can be cut in a certain way in order for it to produce an electrical charge. This effect makes Quartz very useful for radio, television, and radar. Colors or inclusions in Quartz are due to the presence of other minerals (particularly iron), combining with Quartz during its formation. Common varieties are rose quartz, amethyst, citrine, rutilated, and tourmalinated quartz. Lemurian crystals have horizontal striations on one or more sides.