$11.50
In stock
SKU
Kid-1
Add to Wish List Add to Compare
Quick Overview
Stegosaurus model by Safari Size: ~ 5-1/2" long x 3" tall We've only put up a handful on the web. But, we have them all! If you don't see it, just e-mail us.
Skip to the end of the images gallery
CLICK TO ENLARGE 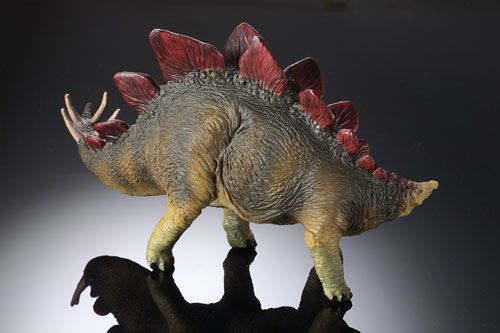 Skip to the beginning of the images gallery
More Information
Stegosaurus is a genus of herbivorous thyreophoran dinosaur. Fossils of this genus date to the Late Jurassic period approximately between 155 and 150 million years ago, in the western United States and Portugal. Stegosaurus would have lived alongside dinosaurs such as Apatosaurus, Brachiosaurus, Allosaurus, and Ceratosaurus of which the latter two may have been predators of the Stegosaurus. The Stegosarus was a very large and heavily built herbivorous with rounded backs, short fore limbs, long hind limbs, and tails held high in the air. Due to their distinctive combination of broad, upright plates and tail tipped with spikes, Stegosaurus is one of the most recognizable kinds of dinosaurs. The function of this array of plates and spikes has been the subject of much speculation among scientists. Today, it is generally agreed that their spiked tails were most likely used for defense against predators, while their plates may have been used primarily for display, and secondarily for thermoregulatory functions. Stegosaurus had a relatively low brain-to-body mass ratio. It had a short neck and a small head, meaning it most likely ate low-lying bushes and shrubs.