This Funnelbeaker knife is a wonderful piece, retaining excellent sharpness in its serrations. There is only one minor tiny chip, exactly where the custom stand's thin arm nozzles into it.. There is also a small depression where the other arm of the stand supports the piece. It looks to be a wear facet, but we believe it's but the color of the stone. The overall color is ivory cream. This piece was very nicely worked by its original creator. We stand by the provenance of all our material and can provide a letter of authenticity upon request. 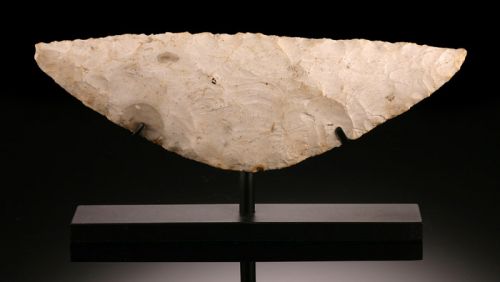 The Neolithic (Neo=new; Lithic=stone) era is also called the New Stone age, which began around 10,000 BC and ended between 4,500 and 2,000 BC. The Neolithic era varies in time span depending on geographic location. The Paleolithic era, which originates in the beginning of human life, continued until the Neolithic revolution. Where as Paleolithic humans lived a nomadic lifestyle in small groups consisting of twenty to thirty people; Neolithic humans farmed in permanent settlements and raised/herded animals; agriculture was discovered and became a major source of food. The concept of private property and ownership emerged for things such as land, livestock and tools. Neolithic people were shorter and had lower life expectancy, Diseases like tooth cavities and typhoid emerged in the new stone age. Neolithic women had more children because the lifestyle was no longer nomadic. Stone tools were the norm, but began to be more sophisticated, specialized, and were often polished to a fine finish. Rocks with a high percentage of silicium dioxide (SiO2) were best suited for tools, as a sharp blow causes pieces to "flake" off, leaving sharp edges. Polished stone tools were made sharper by grinding the tool with another coarse abrasive rock to remove the chip scars either from the entire surface of around the working edges. At times the tools were also “polished”: a final grinding with a fine abrasive. Scientists consider the creation of all these tools a sign of early human ingenuity.

The Funnelbeaker Culture (named for the ceramic that were made, having tops in the shape of funnels) was a culture in the Neolithic, 4th millennium BC, living in central / northern Europe, who merged Neolithic & Mesolithic technologies. In this area, animal-husbandry became the standard, along with farming or hunter-gathering, depending upon the people's geographic. It was an era that barely predates the Bronze Age, as while Flintstone was still widely used and traded, towards the later part of the Neolithic period, some settlements were mining mettle to use for axes and knives.

Settlements consisted of small single family dwellings. However, some Funnelbeaker needed to periodically move around for small distances as they depleted the areas used as farmland. For some reason many flintstone axes and knives have been found in in lakes and streams by what would have been farmlands, in Sweden & Denmark.