The photos of this amazing specimen truly do not do it justice.

The natural aesthetics of the overall shape and formation of this piece, composed with its pristine stryated Lemurian crystal points demonstats the natural wonders of art that Mother Nature can create.

The crystal points are well developed, clean and clear, with it appears to be druzzied Hematite, peppering the entire piece and intermixed clorite throughout the host matrix. 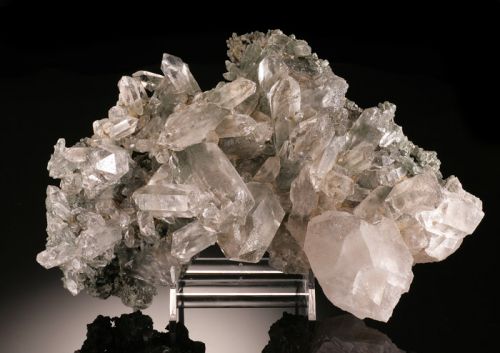 Clear Quartz is one of the most admired minerals by both geology enthusiasts and those practicing the Metaphysical properties of minerals. Quartz is composed of silica (SiO2), and forms an important part of most igneous rocks. Quartz occurs in crystalline masses, and when conditions permit, it forms hexagonal crystals. Perfect crystals are rare. Industrially, crystal Quartz can be cut in a certain way in order for it to produce an electrical charge. This effect makes Quartz very useful for radio, television, and radar. Colors or inclusions in Quartz are due to the presence of other minerals (particularly iron), combining with Quartz during its formation. Common varieties are rose quartz, amethyst, citrine, rutilated, and tourmalinated quartz.

Himalayan quartz is mined by hand in the Himalayan mountain region in the sacred Kullu Valley of Himachal Pradesh, India, an area referred to as the Valley of the Gods. Pink Himalayan quartz emits a soft pinkish glow, derived from trace amounts of Iron. Green Himalayan Quartz contains Chlorite, which gives it the green hue. These crystals are among some of the rarest and most difficult to obtain, due to their location and the fact that it is carried off the mountain in backpacks, before being cleaned by hand.

Mount Meru, which is also called the shark fins, is one of the most beautiful regions of the Himalaya, with beautiful glaciers.
The sacred Ganga river flows from there, and this region is the center of all the Hindus Indian people for the “Holy Bath” and meditation.
Mount Meru is a place which solves all the questions connected so as to explore life in its depth.
It is a place for Soul Cleaning.