$145.00
In stock
SKU
i-j-303-DS
Add to Wish List Add to Compare
Quick Overview
Pyritized Ammonite stud earrings made by Navajo artist E. Etsitty (signed on the back). The Ammonite is surrounded by sterling silver. The post is set approx. 1/8" below the top of the earring. We have 2 pairs of earrings available and the Pyritized Ammonite varies slightly. Location of Pyritized Ammonite: Dubrovski Mine, Russia Time Period: Jurassic Period ~160 M.Y.O. Overall Measurements: 1" wide x 1-1/8" long .
Skip to the end of the images gallery
CLICK TO ENLARGE 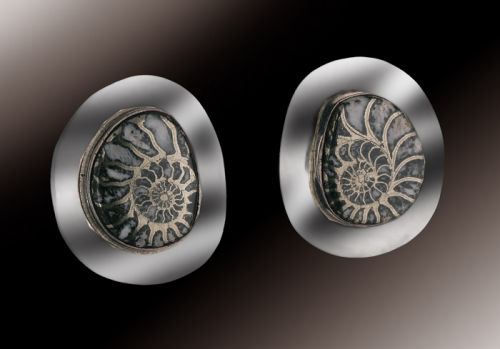 Pyritized Ammonites are considered some of the most collectable type of Ammonite fossil specimens. Iron Pyrite, also known as "Fool's Gold" enters the Ammonites chambers, replacing the animal's structure cell by cell. When the cellular replacement process goes just right, a magnificent fossil specimen, such as the one pictured, is created. The name Pyrite is derived from the Greek πυρίτης (puritēs), "of fire" or "in fire," from πύρ (pur), "fire.”

Lapidary and silversmithing is an important way of life for the Navajo people. Starting in the 19th century, a man named Atsidi Sani (1830 –1918) is credited with being the first among his people to learn the fine artistry of jewelry making. Atsidi was taught by a Mexican man named Nakai Tsosi, who also taught the craft to other Navajo members.