Fossils may have a catalogue number from Dave's collection. 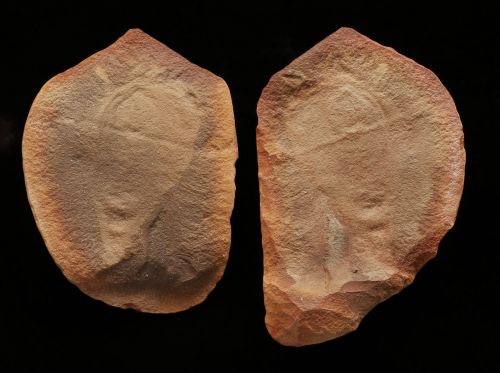 Tullimonstrum gregarium, popularly known as The Tully Monster,  is the Illinois State Fossil & is perhaps one of the most mysterious fossils ever unearthed...

Age of the Tully Monster
During the Pennsylvanian Period (roughly 307 million years ago), the land that is now Illinois lay near Earth's equator. Dense swamps, forested with primitive plants, covered much of western and central Illinois. In shallow seas nearby, the Tully monster swam along with relatives of modern shrimps, jellyfish, squid, sharks, and other marine animals. Rivers that meandered through these swamps carried sediment as well as leaves and other debris from land plants into the sea. The remains of soft-bodied animals like the Tully Monster are rarely preserved as fossils. But conditions in these seas were just right; animals that died were buried so quickly in the mud, that many of them escaped the deterioration caused by scavengers and decay.

Finding the Tully Monster
The Tully Monster came to the attention of researchers when, in 1955, amateur collector Francis Tully presented his unusual find to curators at Chicago’s Field Museum of Natural History. The creature was bizarre, owing to an elongate tapering body with a squid-like tail, an extended snout sporting a toothy claw at its end, and what appeared to be a pair of stalked eyes projecting perpendicular to its body. In 1966, this strange animal was given a scientific name to honor its peculiar form and its discoverer. Found in ironstone concretions from the famous Mazon Creek Lagerstätte (or Mother Lode) and made accessible to collectors through industrial coal mining, this soft-bodied “monster” eluded formal classification for over 60 years. Not until 2016, by extensive morphological research from Yale University and other institutions, was the Tully Monster determined to be an early vertebrate and likely a jawless fish on the stem lineage of modern-day lampreys. It was in 1989 that it became the State Fossil of Illinois.

Collectability, Provenance, and Reputation
During the 1950's, 60's & 70's Dave Douglass began his passion for fossil collecting in an area known as the Braidwood / Mazon Creek fossil beds in Illinois. This region contains one of the most abundant fossil deposits on the planet, which were unearthed as gigantic shovels stripped coal from the top layer of the fossil beds. Dave, with his parents, and eventually his wife Sandra, would walk behind the enormous machines (a thing that would no longer be allowed due to today's more strict safety standards), collecting opened & unopened nodules. These nodules were siderite, or iron carbonate, fossil concretions. Dave was one of the first collectors of these fossil nodules, and it's believed he has one of the most important Mazon Creek fossil collections in the world. Of his collection of 307 million year old specimens is an extinct, bizarre creature, known as the Tully Monster. The following Tully Monster specimens are now available from Dave's private collection, which has been housed away for decades. They were collected legally and each piece has been cataloged. Our research leads us to believe these are some of the finest quality Tully Monster specimens on the market today.