Amazing gemstone carvings sitting on a unique mineral formation. The Roosters have been carefully carved out of Fluorite with Carnelian, and what looks like Calcite and Red Jasper accents. They are perched on a unique quartz formation including small portions of Tourmaline. The birds detatch from the quartz and insert into the base stone on metal posts. The thought and detail that went into this carving are truly astounding. 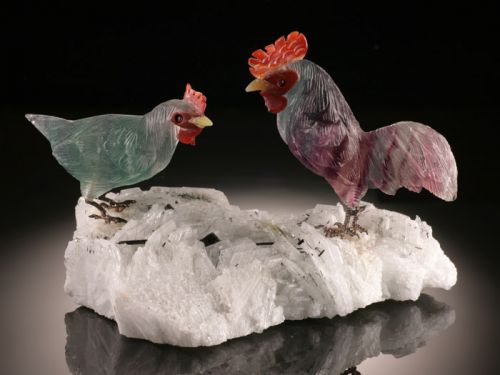 Fluorite is the "State Mineral" of Illinois. Fluorite forms in a variety of colors and is transparent to translucent in clarity. The chemical composition of Fluorite is CaF2, (calcium & fluorine.) The variation in colors are due to trace amounts of other elements replacing the calcium during the crystalline formation.

Fluorite is used in a variety of industrial purposes and the overwhelming percentage of Fluorite in the United States was mined in Illinois and Kentucky. Illinois became the leading Fluorite producer in the early 1940's, but during the 1990's, 90% of the U.S. Fluorite was imported with Illinois remaining the last U.S. producer.

Fluorite was was mined deep underground with many of the mines over 1,200 feet deep. The last Illinois mine was capped and flooded in 1995.