$215.00
In stock
SKU
i-j-308
Add to Wish List Add to Compare
Quick Overview
High quality Ammolite with colors ranging from red to green to purple. Because the material is natural, there can be a slight variation in the color, but we will make sure to pick an awesome piece for you. The earrings are bezel set with sterling silver. 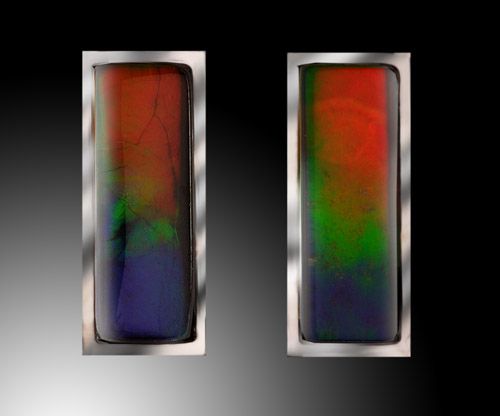 Skip to the beginning of the images gallery
More Information
Ammolite is a natural creation, formed by multiple thin layers of aragonite on Ammonites, 'a shelled sea animal similar to a nautilus', creating a beautiful display of iridescent color rivaling that of fine opal. These special pieces are highly valued because of their rarity in locality and quality. There is only a small area of the St. Mary River, in southwestern Alberta, Canada, where the world's commercial supply of Ammolite comes from. Only two companies mine the Ammolite there from the Bearpaw Formation. Ammolite began forming in the Bearpaw Formation 70-75 million years ago when the Earth's forces were creating the Rocky Mountains. At the time, the area on the east side of the mountains was the Western Interior Seaway. Rains falling on the eastern side of the mountains washed sediment into the seaway, which became the bedrock of the Bearpaw Formation. Ammonites, an extinct sea animal similar to Nautilus, lived in the waters of the Western Interior Seaway. When those ammonites died, they sank to the bottom of the sea and were covered with sediment which over time became the iridescent Ammolite we see today. Ammolite was officially recognized as a gemstone In 1981. and in 2004 it was named the official gemstone of the Province of Alberta. Ammolite is very fragile, and good quality is difficult to come by. For use in jewelry, Ammolites are often treated similarly to opal, and will be made into a doublet or a triplet. Doublets of Ammolite are often backed with shale or siderite, and triplets are backed like doublets but also topped with a transparent cover such as quartz, for protection and stability. Ammolites are beautiful specimens, and a great conversation piece and a classic example of art created by Mother Nature.