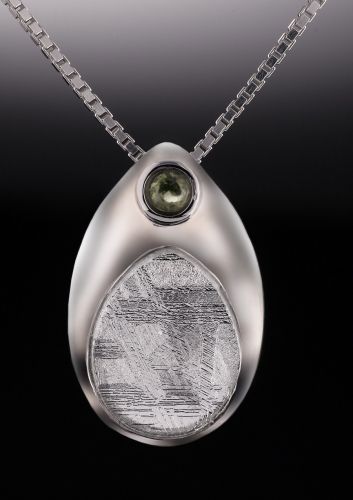 The Muonionalusta is a nickel-iron meteorite first discovered in Sweden in 1906. Nearly 100 miles north of the Arctic Circle near the small village of Kitkiöjärvi two children stumbled over a rusty metal object lodged in the ground. After several years of study it was concluded to be an iron meteorite. It is thought to have fallen approximately 800,000 years ago, making it the largest meteorite to have fallen during our present geological period, "the Quatenary", spanning more than 2.5 million years. It is generally assumed these meteorite specimens were transported by glacial action from the original strewnfield. The Muonionalusta meteorite is buried in the permafrost and must be excavated by hand. It is also significant to science as the first iron meteorite in which Stishovite was found, a rare and extremely hard silicon dioxide polymorph of quartz that is formed by very high shock pressure. Classic Widmanstätten patterns are visible; characteristic for iron meteorites they form an unearthly metallic grid in shimmering shades of gray and silver, comprising two forms of extraterrestrial nickel-iron, kamacite and taenite. The meteorite is a piece of what used to be the core or mantle of another planet. It has an extremely high nickel content, 8.4%, and other small amounts of elements which are rare on earth. However, the majority of its weight, "nearly 90%", is iron. The Muonionalusta is a fine octahedrite meteorite, giving the design seen on the surface of cross sections a very fine detail. This pattern, called a Widmanstätten pattern, is made up of nickel-iron crystals that form only with the extremely long cooling time granted by hurtling through space. They are seen when a meteorite is treated with an acid to raise the pattern, and make the slices of Muonionalusta especially attractive.

Moldavite is a unique type of Tektite, which are a natural variety of glass formed by meteorite impact. The meteorite's super-heated mass strikes the ground with such force that it can melt silicate material from the earth's surface. This material is then catapulted into the air where it cools and lands many miles away from the impact site in the form of a Tektite.

Moldavite's green, semi-translucent color makes it a unqiue curiosity among Tektites, and the only one suitable for faceting as a gemstone. It is found almost entirely in what is now the Czech Republic, though smaller amounts of the same material have been found in Germany and Austria. Current scientific opinion is that all of the material came from the same impact, a meteorite that fell some 14.5 million years ago and caused the crater-like depression in western Bavaria, Germany called the Nördlinger Ries.

Most Moldavite is collected in and around the Moldau River, and is named after the town of Moldauthein in the Czech Republic.