The Penguin has been carefully carved out of Marble, and it is perched on a cluster of Pink Tourmaline in Quartz. The bird detatches from the quartz and inserts into the base stone on metal posts. The thought and detail that went into this carving are truly astounding. 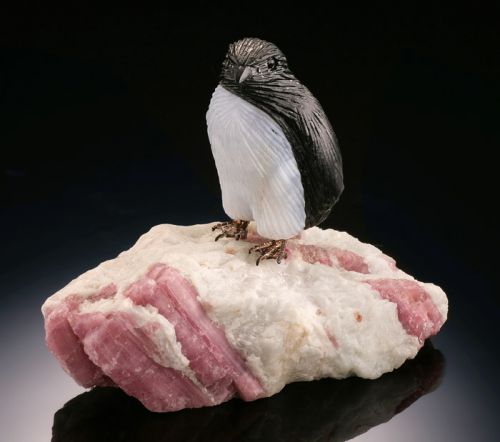 Albite / Elbaite, also known as Tourmaline is a group of mixed crystals with the following major members, Elbaite, Dravite, Schorl, Buergerite, Tsilaisite, and Uvite. Elbaite forms in igneous and metamorphic rocks and veins and have crystal that can be tinted by other minerals, thus allowing for a rainbow of colors to be formed. This sometimes allows for multi-colored specimens (watermelon tourmaline) to sometimes form. What distinguishes tourmalines are the three-sided cross sections that are different than any other mineral. The crystals are Pleochroism, meaning they will display different coloration when viewed at different angles, due to light being bent and refracted at a slower rate through one crystal as opposed to another. If the specimen is then viewed at a different angel, the light entering will be observed differently.

Quartz is one of the most admired minerals by both geology enthusiasts and those practicing the Metaphysical properties of minerals. Quartz is composed of silica (SiO2), and forms an important part of most igneous rocks. Quartz occurs in crystalline masses, and when conditions permit, it forms hexagonal crystals. Perfect crystals are rare. Industrially, crystal Quartz can be cut in a certain way in order for it to produce an electrical charge. This effect makes Quartz very useful for radio, television, and radar. Colors or inclusions in Quartz are due to the presence of other minerals (particularly iron), combining with Quartz during its formation. Common varieties are rose quartz, amethyst, citrine, rutilated, and tourmalinated quartz. Amphibole Quartz (or Angel Phantom Quartz) has inclusions of several different minerals, including Asbestos, Limonite, Kaolinite, Hematite, and Lithium. The name Angel Phantom Quartz comes from the appearance of the inclusions that have been likened to the wispy wings of angels. Metaphysically, Amphibole Quartz is said to let the holder communicate with their Guardian angel and indicates when angels are nearb