Delicate quartz crystals sparkling along a pyrite and calcite matrix. There are silver-gray chunks of what seems to be galena in this specimen as well. 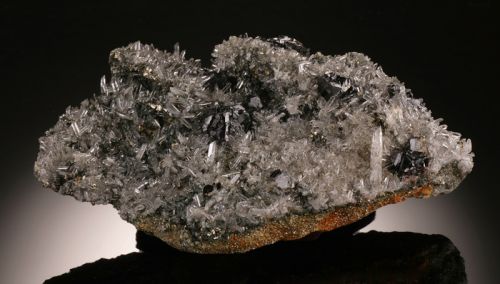 A golden yellow to brown, widely occurring mineral sulfide, FeS2, Pyrite is used as an iron ore and to produce sulfur dioxide for sulfuric acid. It is also known as Fool's Gold because it resembles gold, even though it is harder (H. 5-6) and a paler yellow. Pyrite is often found in quartz veins, sometimes even with gold. Pyrite crystals are common; it may also occur as grains or in masses. It streaks a greenish black and when tarnished, may resemble chalcopyrite. If struck sharply against steel, pyrite gives off sparks. It is thought that early man carried pyrite to start fires that contributed to his survival. The name itself is derived from the Greek πυρίτης (puritēs), "of fire" or "in fire," from πύρ (pur), "fire.” Although Pyrite is fairly common, specimens such as this are highly collectible.

Clear Quartz is one of the most admired minerals by both geology enthusiasts and those practicing the Metaphysical properties of minerals. Quartz is composed of silica (SiO2), and forms an important part of most igneous rocks. Quartz occurs in crystalline masses, and when conditions permit, it forms hexagonal crystals. Perfect crystals are rare. Industrially, crystal Quartz can be cut in a certain way in order for it to produce an electrical charge. This effect makes Quartz very useful for radio, television, and radar. Colors or inclusions in Quartz are due to the presence of other minerals (particularly iron), combining with Quartz during its formation. Common varieties are rose quartz, amethyst, citrine, rutilated, and tourmalinated quartz. Lemurian crystals have horizontal striations on one or more sides.